SKAdNetwork and the iOS 14 release fundamentally change how attribution is done in the mobile performance marketing space. Affise has prepared a solution, which allows you to work directly with SKAdNetworks as effectively as possible taking into account all limitations and peculiarities.

Basically, there are four scenarios:

In this guide you can find information about the first three scenarios. If the last scenario is relevant - check our guide about Probabilistic Attribution.

What to begin with?

1) Register at Apple Developer. Once you're done with that, get your Ad Network ID.

2) It's necessary to generate a Public Key. Here you can learn how to do it.

❗ By default, only users with General manager type have access to the SKAdNetworks subsection.

By this tool you can define targeting according to agreements with your affiliates. Let's say the affiliate #123 has two sources: from France (sub value #1) and from Germany (sub value #2). Then you can create two Campaign IDs: pid 123 + 1 and pid 123 + 2.

4) Add a SKAdNetwork profile to the Advertiser's profile on Affise.

If you're a direct advertiser, you need to create a profile for yourself as an Advertiser and choose the SKAdNetwork you've created.

If you work with a direct advertiser and have your own application in App Store, you need to create a profile for your real Advertiser, so your Advertiser should tell you this information.

If you work with an affiliate of the direct Advertiser, you need to create a profile for your Advertiser (not the direct one), so he should give you this data.

It is possible to add several SKAdNetworks for one Advertiser. It can be useful if your Advertiser is a company when each developer has his own Ad Network ID in SKAdNetwork.

5) The last step is to create an offer. The main principle is 1 offer per 1 application. Why so: each offer should contain Apple App ID:

As for offer goals: possible values are from 0 to 63. You can assign the goal title to any of the values in the way you want, but the goal value should be from 0 to 63. 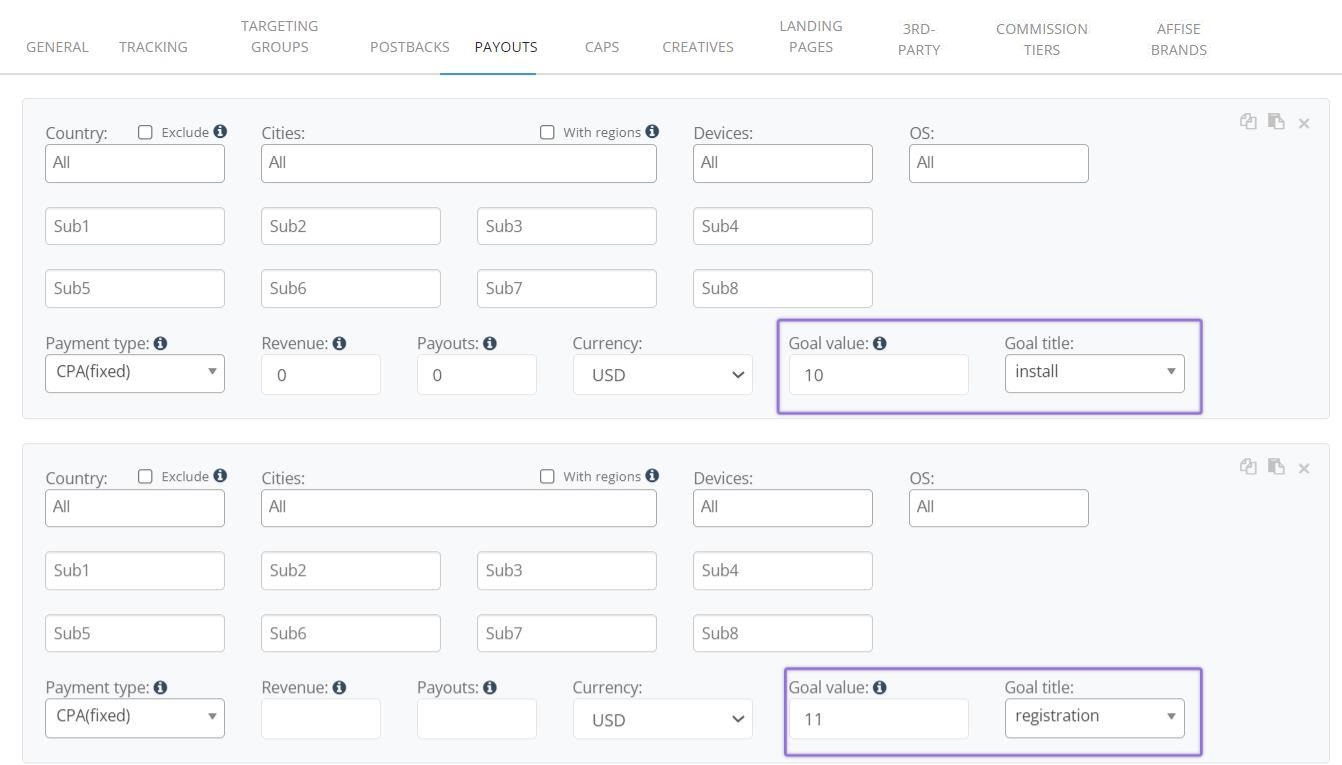 In order to get postbacks in the correct way you need in total:

Check whether you have all the values before you start working with SKAdNetwork.

To receive postbacks from SKAdNetwork you need to create a postback link.

The domain for the Admin panel is used in the link. If you have your custom domain, you can use it as well.

The postback link should be set up in SKAdNetwork.

❗ No additional parameters are used in the postback link. Affise receives the information from SKAdNetwork in the form it sends the data in the response.

The postback is sent by SKAdNetwork in JSON format by POST method and contains the following information:

The flow of postback validation

You can see all the parameters SKAdNetwork sent to you in Statistics -> Server Postbacks slice:

You can set the postback for the SKAdNetwork integration. Only conversions received from SKAdNetwork will be sent via the link, you've set up with the help of this option.

Payouts: There is a thing you should mind when creating an offer for SKAdNetwork. As the only thing that determines the payout is a conversion value (the goal value in Affise), we highly recommend you to create a personal payout for every affiliate who sends traffic for this offer. You can create several personal payouts for the same affiliate with different goal values (from 0 to 63).

Statistics: At the moment we don't provide Statistics on showing all the parameters received in the postback in Conversions slices of Statistics, but we're working on that as well as on an option to filter conversions received from SKAdNetwork. Stay tuned!

Automation: As there is such a peculiarity we highly recommend you to use all types of Automation (CR/Click/KPI) with a period of 24 hours only.

If you still have any questions left on integration with SKAdNetwork, feel free to address them to Affise Technical Support Team via [email protected] as long as to contact your Dedicated Account Manager.