All Collections
Mistargeting as a reason why clicks go to trafficback: what to check?

Mistargeting as a reason why clicks go to trafficback: what to check?

If you receive unwanted traffic, you can redirect it to the Trafficback (Fallback) link. Different links can serve as Trafficback:

Wherever unwanted traffic goes, you can track whether it goes to Trafficback in the self-titled slice of Statistics:

It is a priority list. If a click didn't meet several elements of a targeting group, it won't be recorded for several reasons. Instead, the reason will be depicted according to this list.

But how to find out the exact value of why traffic went to Trafficback instead of the offer? In this article, you will learn how to do it.

The setting will block proxies (i.e send to trafficback or preview URLs based on the offer’s settings) that are known to be problematic based on the global Digital Elements database. It means that clicks went to Trafficback because they were made with the help of a proxy or VPN.

If you see this reason in Trafficback statistics, do the following:

❗ It is needed to understand, that the number of clicks in the Countries slice can be bigger than the number of clicks in the Trafficback slice under 'Mistargeting: Click-level Anti-fraud' reason. Why: because Affise also registers clicks came from forbidden countries, which were made without usage of proxy/VPN. They're depicted in Countries slice together with clicks made with the usage of proxy/VPN. Here you can learn how to check 'Mistargeting: Country' reason.

The example: the offer has Sweden, Switzerland, and Belarus as allowed countries, but in Statistics, there are clicks under 'Mistargeting: Click-level Anti-fraud' reason: 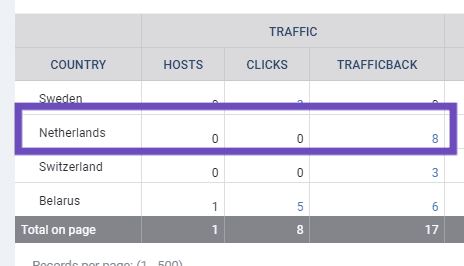 You also can use a filter by affiliates or drilldown report:

When you've understood who sends VPN/proxy traffic, you can contact this affiliate directly.

IP whitelist/blacklist is located here in the Targeting group: 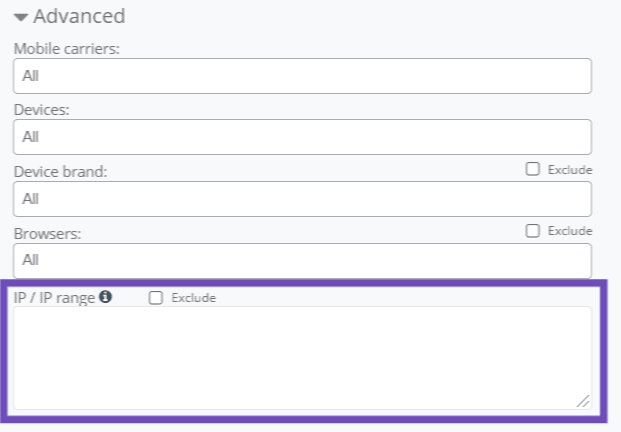 If you inserted IPs to the whitelist to allow a certain country/region/city, then you can do the following:

1) Check which country/region/city they belong to. In order to to that please refer to the Technical Support team via [email protected] or the life-chat. Our specialists will help you to define which country/regsion/city do this IP belong to according to the data base (called 'Digital Elements'), used by Affise.

2) When you found it out, check the Countries slice of statistics: number of clicks in Trafficback column. All countries which those IPs don't belong to are the reason why clicks went to Trafficback.

If you inserted IPs to the blacklist to exclude a certain country/region/city, then you need to proceed with all the steps above, but in this case, clicks in the Countries slice mean that IPs in the blacklist belong to these particular countries.

In the case of regions/cities, you have to clarify it directly with your affiliates, because we don't store data on clicks gone to Trafficback according to their cities and regions.

Recommendation: if your goal is to limit countries, then it is better to use the 'Countries' field in the Targeting group. Then you won't need to use IP checkers. Use the 'Exclude' flag if you want to receive traffic from all countries except the mentioned ones.

All three options are located here:

Here you can read more about how to set up targeting restrictions by subs.

Affise doesn't store sub-values of click, which went to Trafficback, however, there is a workaround:

Here you can see all the information about clicks, including the one passed by the affiliate.

Whichever slice of Statistics you use, don't forget to use a filter by offers/affiliates.

Since Affise doesn't store all relevant data on click, which went to Trafficback, we recommend you to check it directly with your affiliates. You can request a click log from his side and compare the data from it with your Targeting restrictions in the offer.

❗ In the case of regions/cities, it is needed to remember, that Affise defines both ones when clicks are being registered on the platform. Affise uses the Digital Elements database to define a certain region/city. As a result, there might be a situation when while comparing data from the affiliate's file and Affise file you'll see only allowed regions and cities. However, it doesn't mean that Affise defines those in the similar way how the affiliate does. For example: if you see Moscow in the affiliate's file and this city is allowed in your offer, it means Digital Elements defines it as some other city in Affise.

Also remember, that Mobile IPs tend to change locations every week. This is also why Affise doesn't make manual updates to mobile IPs since one user can have one IP in one state during a week, and then another user can have the same IP in an entirely different state/region the next week. This is just the nature of mobile networks and how they operate.

This option is located here:

If you see this reason in Trafficback statistics, do the following:

You also can use Drilldown report to look through the data separated by affiliates:

Make sure you don't have the Click-level Anti-fraud option turned on in the offer. In this case, clicks, which came from unwanted countries and were made with the usage of proxy/VPN will be depicted in Countries slice as well, but the reason in Trafficback statistics will be 'Mistargeting: Click-level Anti-fraud'.

❗ Remember, that Affise uses the Digital Elements database to define a certain country. As a result, there might be a situation when a certain country is defined as Russia in Affise, but on the affiliate's side, it is China. It is an ordinary situation.

If you still have any questions left on the Trafficback feature, Trafficback statistics, feel free to address them to Affise Technical Support Team via [email protected] as long as to contact your Dedicated Account Manager.