⚠️ The KPI Automation feature is available only for certain plans. Contact your Affise account manager to get the feature.

KPI Automation is aimed to automate work with your offers and/or affiliates based on the value of KPI (the goals ratio).

If you would like to use KPI Automation, you need to get a permission for 'Automation' section in Users -> User management -> A certain user -> Sections -> Automation: 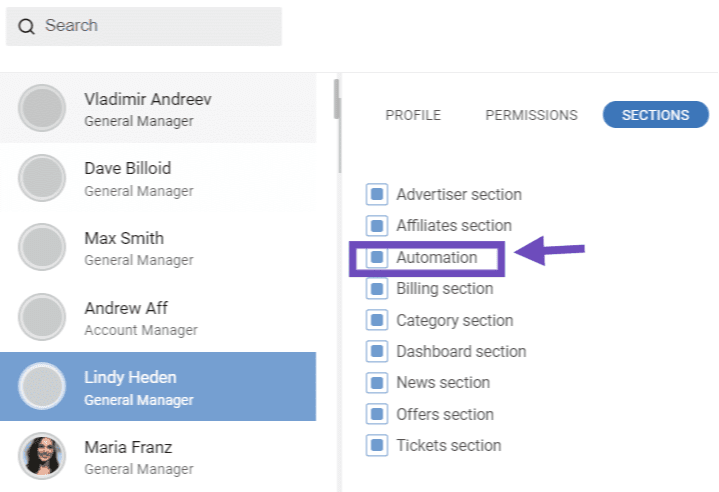 How is KPI calculated?

KPI is the ratio of two goals of the offer. The formula is the following:

Practically this value allows you to understand how attractive the offer is in the eyes of end users.

High KPI means that quite many end users went further after accomplishing the first goal on the web page/in the application with the offer itself. However 100% KPI is hard to achieve, so very high KPI might be a sign of fraud.

Low KPI means that not many people have reached the second goal. It may mean different things, for example, the affiliate sends traffic from non-target audience.

It is not necessary to calculate the very first and the very second goals of the offer.

The general logic is: a dividend is a goal, which is supposed to be reached after the goal that is in a divisor.

All you need to do is set a specific rule(-s) with an indicated KPI value.

Below you’ll find the description of all three sections.

This section allows setting conditions under which the automation will work and the result, which you want to get eventually. The following fields need to be filled:

Offer: select the offer, which the rule will work for.

Action: the eventual result you would like to get. There are three possible options:

a) To disable the affiliate from the offer. If you want to use this option, please, specify the affiliate in a relevant field, but don't specify the sub account (see the information below). If the offer has pre-moderate or private level of privacy, you can select only those affiliates, who're connected to the offer.

b) To block a value passed via &sub1 - &sub5 parameters in the Affise tracking URL. The value is blocked on the offer level. You need to specify the affiliate(s), who passes sub1-sub5 values as well as the very sub account.

If you disconnected the affiliate from the offer/made him inactive or banned or deleted him after indicating in the rule, the rule won’t work for him.

KPI rule: here you may indicate necessary goals as well as KPI value you would like to reach. If you deleted the goal (in the offer settings, 'Payouts' tab), which was previously indicated in the rule, the rule won’t work.

Range: the time range, which the statistics will be checked for hourly. Available values are: hour, day, week, month.

Notify manager: you can decide whether to send a notification to a manager, who is assigned to an affiliate upon disabling the affiliate from the offer or blocking sub1-sub5 values.

❗ The system always sends a notification to affiliates, who were disabled from the offer or whose sub values were blocked.

You can set up an unlimited number of rules.

KPI Automation works with full hours: if you set up the rule at 5.40, it will start checking Stats at 6.00, not earlier. Then the Automation tool will check the data for a specified time range per KPI, calculated according to the formula, mentioned above. KPI Automation checks Statistics each hour for the chosen time range.

If the KPI value in Statistics is less than the indicated one, the system will do the following depending on the settings:

1) Disabling the affiliate from the offer. For example: if you indicated an affiliate in the rule and his KPI is less than the needed, he will be disconnected from the particular offer and won't be able to send traffic to it.

2) Block sub1-sub5 value. For example: the indicated affiliate passed ‘123’ in sub2 parameter via Affise tracking URL. Then the conversion for this particular click was made. When checking the Statistics, KPI Automation counted this conversion. It turned out that KPI value was lower than you set. As a result ‘123’ value will be blocked in the offer.

3) Change the status of conversions. For example: when checking the Statistics, KPI Automation observed that KPI value was less than you set. As a result statuses of all conversions with the subsequent goal for the chosen time range will be changed.

KPI Automation considers values whitelisted/blacklisted under 'Allowed sub accounts' on offer's level and automatically makes the needed changes in this field based on how a specific rule has worked.

There are 4 scenarios related with sub value blocking regarding blacklist and whitelist in the offer:

Use change log to see when a rule was added, updated, and deleted:

Block log contains information on the result: either disconnecting the affiliate, blocking sub1-sub5 values or changing of conversions status.

Here you can see the action done by KPI automation, the affiliate, who the conversion/sub value belongs to as well as desired KPI and current KPI - the actual value.

You also can understand that conversion status was changed due to KPI in User Activity log: choose ‘Conversion edit’ type of logs, then you’ll see the comment:

You can check KPI in the Custom slice. You always can check there which sub-values are coming from affiliates as well as check goals of the conversions.

Don't forget to specify a certain affiliate in a filter or to tick 'Affiliate' or 'Affiliate ID' flag if you want to search for subs of all affiliates.

1. How does KPI Automation works together with CR Automation?

Let's suppose there is a KPI rule:

And a CR rule:

2) How are several KPI rules with similar settings correlated with each other?

Let's suppose you have the set of two rules:

There are two differencies: a desired KPI value (100 and 50) as well as a desired conversion status (declined and pending).

You've got the actual KPI value as below 100% - below the highest desired value.

Once Statistics is checked, the system changes conversions' statuses to Declined.

3) How can I find out, that conversion has changed its status due to work of KPI Automation?

There are three ways:

In 'Conversions' slice of Statistics: each changed conversion has a relevant comment [Blocked by KPI Automation]:

4) How can I manage KPI Automation via API?

All available methods for KPI Automation are here.

With the help of API you can do the following:

All parameters are required

All parameters are required

You can find an ID of a certain KPI rule by making a request for a list of all KPI rules.

You can find an ID of a certain KPI rule by making a request for a list of all KPI rules.

Should you have any further doubts or questions on KPI Automation work, feel free to contact our support team via [email protected]