Trafficback URL (Fallback, Redirect URL) is commonly used to monetize the remnant and non-targeted traffic. It may be applied when:

❗ If you enable 'click-level antifraud' checkbox in the offer settings then all the fraud traffic will be redirected to the Trafficback URL.

In case traffic cannot be accepted for any of the reasons above, the user may be redirected to the link specified as the Trafficback URL. As a result, you do not lose traffic and can monetize remnant traffic on other projects of the affiliate program or third-party resources. Also at Affise, you can either set up Local and Global Trafficback.

Where you can find the Trafficback option in Affise?

Trafficback Feature in Affise is currently represented by two types:

❗ Do not use postback URL as Global Trafficback, if you would like to get conversions for each click you receive. The click id won't be put to the postback link automatically and it will lead to a lot of broken postbacks with the error message 'Broken clickid'.

There are several schemes of Trafficback work based on settings.

Generally, remnant and non-targeted traffic can be redirected to:

There are 7 ways of Trafficback settings:

Traffic will be redirected to Trafficback URL when:

❗ The traffic will always go to Disabled page in the following cases:

Which links can be used as Trafficback URL?

The following links can be used as Trafficback:

Guide on Integration with Advertisers

❗ '{clickid}' or '{click_id}' macros should not be used in Trafficback URL since Affise clickid value will not be generated once a click is sent to Trafficback.

How to set up Affise Tracking URL as a Local/Global Trafficback URL?

To do it, you should firstly choose the offer on the offer's list, which you will use as a Trafficback offer (receiving offer). Once the offer is chosen, you should move to offer's preview page where Affise tracking links are generated under 'Send the link to active affiliate' block on the right:

Here you should select the Affiliate to generate the link:

❗ Affiliate which is chosen should be connected to this offer or you can use a public offer:

Change this part pid=2 to pid={pid}

So, your URL will be:

❗ It is better to set up the offer without any targeting restrictions as a receiving offer (the offer where the remnant and non-targeted traffic will be redirected to), especially, if it is Global Trafficback. Otherwise, the traffic from the receiving offer is considered as non-targeted too and it will go to the same offer because it is set up as Trafficback. Thus the traffic will be cycled and click won't be generated.

How to set up Smartlink as a Local/Global Trafficback

Smartlink is a good way to monetize remnant and non-targeted traffic because usually, it contains several offers with different targeting restrictions, which allows such traffic to be redirected to some offer, chosen by Smartlink algorithm.

Your Smartlink should be updated in the following way:

Change this part pid=50 to pid={pid} - the logic is the same as in the case with Local Trafficback creating. So you link will look like this:

What else should I know before starting to use Trafficback?

At the page with Global Trafficback ('Settings' section -> 'Trafficback') settings you can see two checkboxes: 1) Use for disabled offers and 2) Use by other reasons.

b) The affiliate is disabled from the offer/not enabled to it;

c) The advertiser is disabled for the affiliate.

b) There were not suitable targeting groups

c) Overcap option is ON

d) 'Send hosts only' option is ON

❗ Global Trafficback will be used anyway if traffic didn't match all offers when using a Smartlink.

Where can I find Trafficback statistics?

❗ Trafficback column disappears, if the filter by Smartlink is used and a certain Smartlink is chosen. It is so in the following slices:

You also can see the relevant data in the separate slice named 'Trafficback'.

Who can check Trafficback statistics?

There is specific permission that needs to be granted to get access to the detailed trafficback data. If you’d like your user to see trafficback statistics reasons, you should update his/her user’s permissions and grant them the related permission: access to trafficback reasons stats: 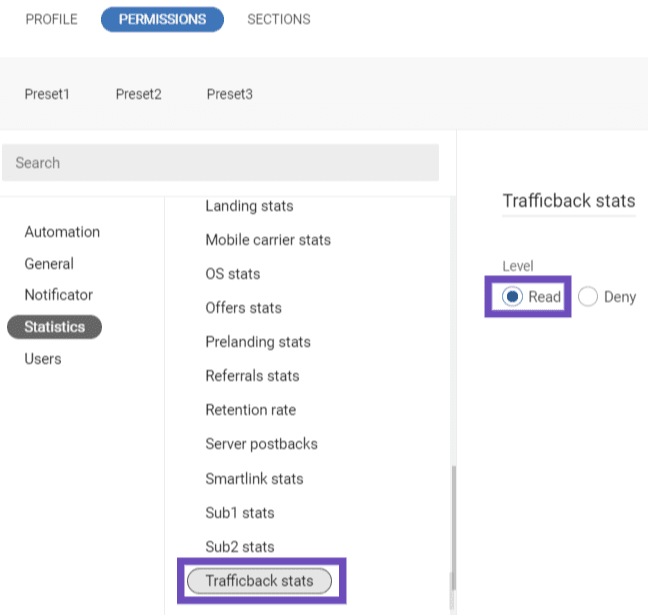 All users can see the Trafficback column with the number of clicks under their level of access to the data. Ex: Affiliate Manager will see only the clicks sent to Trafficback of his affiliates.

Which are trafficback reasons?

The reasons for sending traffic to trafficback can be the following:

It is a priority list. If a click didn't meet several elements of a targeting group, it won't be recorded under several reasons. Instead the reason will be depicted according to this list.

Here you can find instructions about how to avoid sending clicks to Trafficback when it comes to mistargeting.

If you see 'undefined' in Advertisers/Offers/Affiliates slices of the Statistics, it means that under 'undefined' you're viewing the amount of traffic which has been sent to:

❗ The reason 'inactive offer' will be shown each time when both offer and partner are not active.

2) Why do I get the error 'ERR_TOO_MANY_REDIRECTS'?

It means the traffic is cycled. Below you'll find two cases where it can happen:

3) How to set up Trafficback via API?

Local Trafficback can be set up or edited via the following POST requests:

with the help of the parameter: trafficback_url

Preview page can be set up via the same methods with the help of the parameter: url_preview

Global Trafficback can be set up only in UI.

4) Can I set up Trafficback on the affiliate level?

No. You can set up Trafficback only for one particular offer or for all offers.

5) Does the affiliate see statistics on offers with clicks, which went to Trafficback only?

No. Affiliate sees only statistics on offers, which have at least one real click or impression.

If you still have any questions left on Affise Trafficback Feature set up, feel free to address them to Affise Technical Support Team via [email protected] as long as to contact your Dedicated Account Manager.